In 1914 working men and all women were not entitled to vote. Nonetheless, men responded to the call to volunteer to join the army and patriotically fight for their country.

Prior to the declaration of war, women suffragettes and suffragists had been engaged in a battle for the right to vote. Many women stopped their political activities and concentrated on doing useful work to support the war. Many also saw the political advantages of volunteering to help the wounded.

Dr. Elsie Inglis, honorary secretary of the Federation of Scottish Suffragette Societies, mobilised her VADs and other trained women medics and proposed ‘to equip a hospital staffed entirely by women… if not required at home, to be sent abroad.’ Funds were raised and continued to be raised throughout the war. 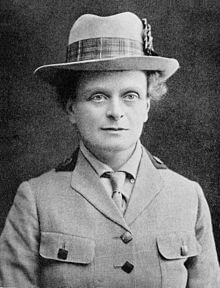 The British army declined Dr. Elsie Inglis’ offered to set up a hospital alongside the army medics, not so the French, Belgian, Serbian and Russian armies. The first Scottish Women’s unit was established in Calais in November 1914, another in Royaumont.

The Scottish Women Hospitals gave women surgeons an opportunity to use their skills where they were needed, prove their patriotism and promote their cause. The Scottish Women’s hospitals provided doctors, nurses, ambulance drivers, cooks and orderlies. Most were women. By the end of the war, 14 medical units had been outfitted and sent to serve in Corsica, France, Belgium, Romania, Russia, Salonica and Serbia. An American unit was set up in Ostrovo in Macedonia. The SWH in Salonica was funded by Cambridge university women’s colleges. This unit combatted the devastation caused by malaria- the allied armies were unsuitably dressed for the climate and conditions. In Russia, the SWH provided a transport column of ambulances and support vehicles. They served in southern Russia and Romania where there was a Serbian division in the Russian army. (It was largely formed of prisoners of war from Austria and Hungary who then volunteered to fight for the allies.) After the Russian revolution in 1917, the unit returned to Britain.

Dr. Elsie Inglis became the general supervisor of all the SWH in Serbia. She was based in Kragujevac; others were built at Vallejo, Krusevac and Mladenovac.

In travelling to Serbia, the women medics were initially responding to the government’s call to save ‘brave little Serbia’.

The Serbian army had 300 doctors for half a million men. Typhus had decimated the military and civilian population. The women found a resilient rural people who struggled with poor health services and the women grew to love them. The Serbs loved them.

After the war in 1918, women over the age of 30 who met the property qualification were given the right to vote. The same Act abolished the property restrictions for men, and extended the vote to all men over 21. Men in the armed services could vote from the age of 19.  Prior to that men who had been fighting abroad couldn’t vote because they didn’t meet the resident qualification!

The Equal Franchise Act 1928 allowed all women over 21 to vote.