Traces of the past

One of the stories my mother told me concerned my walking from our home in Lee Street, Hull to  Cavendish Road school through East Park. Though I was five, going on six, I don’t remember the event. Our family moved from Hull when I was six and I’ve never been back to the house which was my first home. On 24th June, I was able to do what I’d wanted to do- discover what the house looked like, and if the park was as I remember it. 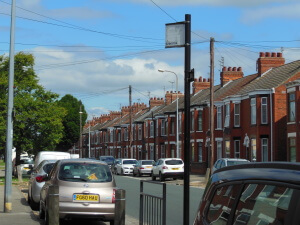 The bus stop on Summergangs Road may not be the same one, but it’s in the place I remembered it.

The bus stop was a short walk from our house and the bus would take me directly to school. Initially my mother would have taken me to the bus stop, but after a few weeks or months, I went on my own. For several days, I decided not to catch the bus, but instead to walk through the park, cross James Reckitt Avenue where my grandparents lived and, what I discovered on Saturday, walk the mile to school. My mother found out because I bought stamps with the bus fare. I  remember the machine, the pleasure of watching the transaction of penny coins becoming stamps bearing the king’s head, and the soft ‘pad’ of the lid after I’d removed my bounty.

I wrote two poems to explore that experience following a workshop by Ian Duhuig at a Bridlington Poetry festival.

I have only a hazy memory of the outside of the house and I assumed I was returning to  a run-down area. Not at all.  The street is quiet, well-cared for and what had been our home very pretty. 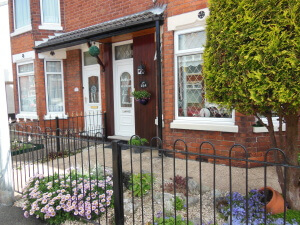 Our home in Lee Street, Hull

My grandparents continued to live in East Hull after we moved and we visited them regularly so I wasn’t surprised by its layout: -the boating lake, the bridge across it, and the water chute. What I didn’t know, was that prior to the Second World War there had been a conservatory and terraced gardens which were ruined during the 1940s bombing. The park that I walked across, where we played, would have scarred by war as much of the nearby Holderness Road and the city centre.

I knew the path I must have taken to school. The stamp machine and shop on the corner of James Reckitt Avenue had gone. I was surprised that my recollection of the route was accurate.

The park was refurbished in 2012 with contributions from the Heritage Lottery Fund. 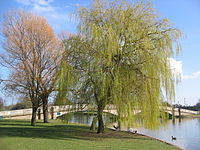 The rare Wicksteed water chute is Grade II listed along with the original in Kettering. Compared to modern theme parks, it is a simple pleasure. Climbing steps to a covered station (not particularly high) shooting in a flat bottomed boat down a shallow ramp to enter a pool with a loud splash and excited screams.

I was pleased to see that the park is well used by individuals, couples, families and small activity groups led by adults- games with a rugby ball, scouts’ activities and each Saturday morning a fun run. 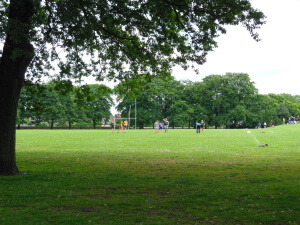 Rugby posts around which adults teach the game to a group of girls and boys.

I was delighted that the area where I was born has transformed itself and is able to enjoy a time of peace.