In waterproofs, I leave the house in heavy rain. The pavements are empty and when I reach the countryside, the ground becomes muddy and slippery. My hat slips down my forehead over my eyes. Nobody cares – the government, NHS. ‘We’re going to hell in a handcart,’ as my dad would say. My initial anxiety at the beginning of the Pandemic returns to taunt me. Abandoned in ICU with no one to hold my hand when I die.

I stop at the turnstile which leads to a public footpath across to the village of Ashow. 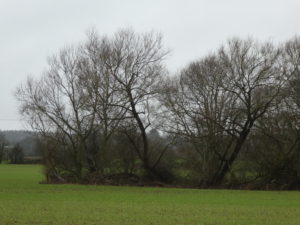 Unseen birds sing in the nearby stand of trees. I can’t see the roots of trees or of the wheat, but growth is taking place. Silently. In the darkest of dark places. The days are becoming imperceptibly longer. I walk with more vigour by the side of fields where, in spring, sheep and their lambs graze. At the bridge over the Avon, if I turn my head to the right, I see the reeds where the swans used to nest. Maybe they will again. On my left the river swirls and eddies; on the bank two or three white ducks.

The church at Ashow is open and I hesitate.  I have no right to enter – I’m what non-conformists call a back slider.  I’m no longer a believer in the traditional sense, preferring to marvel at the mystery of life, its magic, and the miracle of being alive. I go in, masked, with hands gelled. As I step in to the body of the church, two lights switch on and, in front of me, a colourful wall hanging dated 2017, greets me. Composed of individual fabric collages on modern village life, its bright colours life my spirits.  I notice, in particular, one of a cat. At first, I wonder if it’s a fox, but no. Its curves, the run of its ginger fur, are distinctly cat-like. A family pet.

I stay for several moments. The flowers and candles from the end of pew decorations have been removed; I picture past Christmas services.  Four days ago, I stood outside the church on the path through the cemetery, listening to prayers and carols. The decorated tree at the front remains, and the thatched crib by the door. I belong here. To the community of those who long for peace, whose prayers have risen for hundreds of year, hoping for peace on earth, peace in our hearts and in our communities. Outside the rain has slackened to a light drizzle. 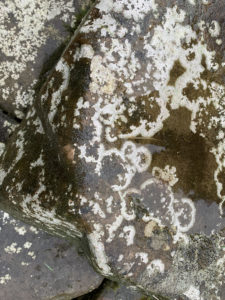 I stop for a coffee and biscuit in the tabled bar at Chesford Grange hotel.  As I write in my notebook, a few guests are chatting in the cosy seated area, background music plays and somewhere a group of people are laughing.

Back outside, the sky looks brighter. Among other things, these woods around Blackdown, have become a comfort. In March/April 2020 they were almost crowded with joggers, families and dog walkers. This morning I’m on my own. The trees are bare branched for the most part, ivy and holly providing greenery. Under my feet, out of sight, roots but also the massive fungal networks which ecologists are rediscovering. No doubt the early inhabitants of this part of Warwickshire knew very well that humans, animals and the earth are dependent on each other. For many reasons, we decided we were not. Leaving Chesford Grange by the path above the Avon

The steady beat of your boots

wakes us from sleep.

We know you by now.

We pass the message on

You stop by fallen Birch

her to rest in

the fork of Beech.

You loved that Birch.

In Spring you trod softly

buds, leaned against its

As the sky melds to greys, purples

you cross drifts of purity

you cross to reach your friend

whisper in your own tongue

words we all understand. 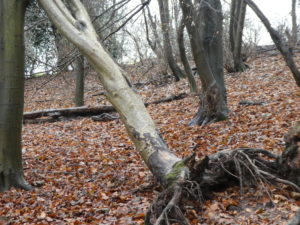 A fallen birch, after the snow melted.

References: Any book/youtube video by or about Suzanne Simard. She’s an ecologist and like so many others, brings hope of the possibility of concerted change.

Tree talk is a poem I wrote during an online Winter Retreat led by Wendy Pratt, poet and tutor. There’s a line ‘We know you by now,’ which I once heard as ‘The trees know you by now.’ If anyone knows the author please let me know as I’d like to attribute it.