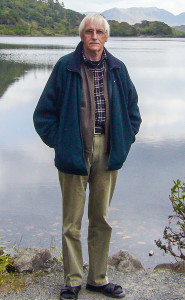 While neither art nor science finds

A limit to our human minds.

So ends, futura ventura, the title poem of this collection, by the late John Alcock. This impressive Pushkin sonnet exemplifies not only his skill as a poet, but his openness to a changing world. The poems travel from places as far apart as Hudson Bay, Norfolk, Dylan Thomas’ grave, from recollections as varied as walking down to a chocolate machine in the dark,  to the moon landing.

John’s skill is lightly worn. Form relates to the subject. Haibun, haiku, couplets, tercet, free verse. 1984 is double rather than single spaced,  with gaps as breath pauses. Primrose Path written in conversational style uses italics, bold and plain text and is centred. All these forms draw attention to the poem, how it might be read aloud, and its meaning interpreted.

The style is accessible and often humorous. In Dance Macabre, a playful description of a bishop and a nun

dancing till they dropped

and the long night was done.

The road to Catfield Flower Festival is taken by ‘Audis and  Dial-a-Buses’. Tramore is written as a conversation, differing recollections of a separation evoked by disconnect and the musicality of words.

You walked down the strand

you would not let me

Although it seems John wrote about anything, anywhere, his perspective  constantly surprises. Prescience is about a father watching his son and, in a breath, that moment shifts to what all fathers hope for their  offspring. Likewise in Observation Platform, the poet returns to a city he knew and  in remembering the past, observes the present and anticipates the future

of then and now

All in all, three perspectives.

In Freefall, John looks from the window and describes an acer his garden. When he stands  in the garden, I expected a description of the inside of the house as seen through the window. But no, he sees the garden again, this time

I see the leaves double 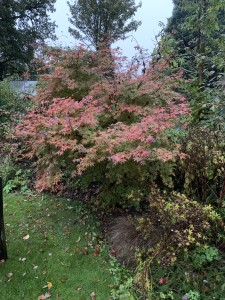 The emotive image,  the image of connection can be deceptively simple. In Opening her Coat, a tender reflection of John’s mother coming into the house,

the illness crept upon her

Another, almost underplayed moment, in Woodchester Park, where remembering ice-skating and falling in the lake

of letting go and sliding…

Several poems acknowledge the influence of other poets. William Carlos Williams, Wendy Cope, Carl Sandburg. Footnotes acknowledge thanks to poetry workshop leaders, often at Worcester cathedral and Cannon poets.  One of my favourite poems is Dan at Carrowdene.  Louis Macneice and his son Dan were estranged during their lives and it was some 30 years later that Dan visited his father’s grave. In wearing a scarf, gift from his father, the centre piece is a simple scarf.

an eloquence of words

Wherever he went, John carried a notebook.

‘My only real home is my notebook’

he wrote in Stopover. That may be true. I think he was at home wherever he went: with family, on holiday, at work, in his memories and his imagination.

You Light Up My Life ends the collection. Again a memory. A family Christmas during a blizzard in North America. A two-mile walk through knee-deep sidewalks to midnight mass on Christmas Eve and back

and yet more candles and hot milk

I won’t spoil the ending, but yet another apt perspective.

This collection, John’s last collection, is joyful. Evocative images, an occasional touch of nostalgia, diverse forms. Written by a poet in love with life, with poetry. A collection to be read, enjoyed  and re-read. 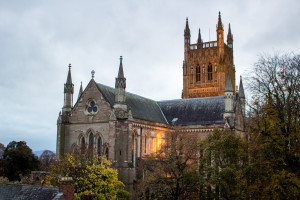