Rebecca Gethin is the author of What the Horses Heard published by Cinnamon Press in 2014. The novel is set in Britain and France during and after the 1st World War. It tells the story of 3 individuals against the back-drop of loss on an enormous scale. It’s a page-turner, an interesting and moving read.

This blog is in the form of my questions and Rebecca’s answers.

1. I wondered how much you knew (a) about horses and (b) horses in the 1st World War, when you began to write this novel.

In my first book, Liar Dice, I didn’t include a single animal. So when my husband remarked that he thought that odd for me, I set out to write something with animals in. I chose horses because for me they represent what is most sensitive and responsive in a world we endlessly try to constrain for our own benefit. Horses also carry the weight of mythology of horses… the myth of the Kelpies, historical horses such as Bucephalus, Marengo, the horses in Homer and in fairy tales because it’s often a horse that comes to the rescue. There’s what they mean to us in terms of power and sensitivity. There’s an old Italian folk tale of a horse that is a trapped human and the hero marries her after chopping off the horse’s head.

The epigraph to this novel is by Richard Jeffries (a great 19th century nature writer) because it was his story of a horse left out in the snow and who dies of cold that started me off. And my sense that Jeffries was writing of a landscape more diverse and richer in wildlife than our own. He was writing about the same place in which he already saw massive changes about to take place: Swindon! I knew I wanted to write about the countryside and how it was changing.

I didn’t know much about horses in 1st World War so I had to research how they were selected, trained, moved about, maintained and cared for.

Despite the title, the book isn’t just about horses. I chose War for the effect WW1 had on our psyches. So even the war is a metaphor.

The story is about a family living on Dartmoor in early 1900s and when war breaks out, Orion, one of the sons, becomes a conscientious objector. His sister, Cass, wants to compensate and to become involved for her own sake, she wants to work with horses and this leads her down a very dangerous path.

It is told from 3 points of view: Orion who is imprisoned, Cass herself and Captain Maurice King, a vet.

The first chapter starts in Orion’s prison cell because the novel is also about conscientious objectors, some of whom were very cruelly treated. Orion’s experiences were common for those who were 100% refuseniks. I researched this through reading diaries and books at the Friends’ Meeting House Library, Euston. I had originally been inspired by letters from ‘conchies’ that had been hidden away for years at HMP Dartmoor Prison Museum where I was working as a teacher.

This book was an experiment in how to make something implausible, plausible. I wanted to see if I could write what seemed impossible, in a time I didn’t know, about things I was ignorant of. Just as with my first book, a single picture inspired the whole thing. In this case, a woman nursing injured horses beside a male vet. No one could tell me it couldn’t have happened.

I learned how women in 1900s lived a much more constrained and restrained life than we do now. You were a chattel and had no rights at all. The Suffragettes were not the only ones to break the mould. In ‘Amazons and Military Maids’, I read about Dorothy Lawrence and was amazed by her being in the Tunnels in WW1. I read about Flora Sandes who was a British woman who became a sergeant in the Serbian army. I thought anything was possible when I read about a woman in the navy in 1800s.

When I dreamed up Cass, she very quickly became a character with a mind of her own. She pulled at my sleeve saying she wanted to go to the Front. I told her she would have to become a nurse, but she wouldn’t have that! She retorted I had no experience of nursing, so couldn’t write about it. She told me she wanted to go with the horses and that I knew enough about horses to write about them. I contacted Professor Richard Holmes and asked his advice about my plans for Cass, or rather, her plans for herself. He generously said that security during WW1 was patchy and I could probably get a woman to the Front line if I researched.

I started researching to see where it would get me… and the worlds opened up. I went to Pluckley to the site of a ‘Remount Depot’ (horses were simply mounts) to the Somme, France and to the Imperial War Museum (who were very nice to me and found me books on conscientious objectors even though it is a war museum) and to the Army Medical Museum on an army base near Aldershot where I had to get security clearance.

2. At one point, Leo (the brother of Orion and Cass) asks if horses can hear what we think, and it seems the answer is yes. Was that true for you before you began writing?

Yes! We kept horses for years and learned how very attuned horses are. I would be riding sometimes and became aware that I needed to be alert to my wandering thoughts.

What did you discover about horses in the writing of the novel? Or was it more a question of weaving what you know into the narrative?

It seemed an extraordinary feat to organise this huge, national task of moving a large number of horses to the Front. Terrible for the horses, of course. There were stampedes as there are in the novel, and there were a number of equine hospitals set up to receive the injured and ill horses because they wanted to patch them up and send them back to the Front. To put it bluntly, a horse cost a lot more than a man to replace, as Cass says. Maurice has to live with this, but he is also researching veterinary science. I didn’t know that before WW1, a horse wounded in battle was simply pole-axed. During the Boer War many horses were destroyed in this way; others were abandoned when suffering terrible injuries. One of the organisational feats of WW1 was to mobilise a huge work force around the movement and care of horses, who initially were essential for the moving of equipment and victualling the soldiers.

I hadn’t a clue as to how I would mould all the ideas together (until the writing happened). Philip Roth said he ‘rubs two sticks of reality together to create a fire.’ A sentence here or there fired me up.

4. All the characters seem to like horses. I assume you do too. What was the hardest part of writing about the horse?

At that time, people were dependent on horses. The motor car was only just beginning to be used. So all the characters are familiar with horses! The Forrester family make a substantial part of their living from horses and the hunt was a big part of country life, though I deplore it myself nowadays, but I knew I just had to hold my nose about that! Even the village baker had a horse so he could deliver bread, but when his horse was forcibly taken away by the military, he ends up with motor transport.

The hardest part of writing this book was the military language and understanding the ranks, and the historical background. I read armfuls of books, had more information than I could ever use. That is why it took me 5 years to write.

5. Maurice refers to the effect of chloroform inhalation. How did you come across that?

I read a veterinary report on line. As in all wars, science and engineering are developed in response to need. So just as Maurice and army vets were learning about horses,  the engineers were developing better motor cars, and subsequently tanks.

6. I love the names you chose for the horses. What was your inspiration?

Cass chose the names she gave to the officers’ chargers she cared for because two horses are the rescuers in the books she read as a child: The Violet Fairy Book has a significant story called The Girl who Pretended to be a Boy. It is woven into the text quite tightly: blink and you’ll miss it! Swan and The Plough are names chosen by their breeder Edward Forrester who was interested in astronomy. Similarly, the names of his children: Cass, Leo and Orion.

The title of the novel came to me in a flash at the very start of writing and I wouldn’t have changed it for the world! 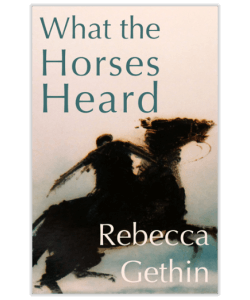 The novel explores the different attitudes and experiences of the 1st World War through the stories of a brother and sister. I loved it.

The novel is available from Cinnamon Press.www.cinnamonpress.com

and as an e-book from amazon.co.uk