A Time for Peace is set, in part, during the Great Retreat from Serbia. The exodus of government, army and people from its country to escape the feared atrocities of its occupying force.

On 21st January 1916, the first of the Serbian army landed on Vido, a rocky island close to Corfu. Shortly afterwards it was followed by 2,000 young cadets. In all, 151, 828 soldiers and civilians were estimated to reach the Albanian coast and evacuate to Corfu.

During the Retreat 243,877 people were killed, taken prisoner or died from hunger or the cold weather. Of 220,000 civilians estimated to have joined the Retreat, 60,000 survived.

The Mausoleum was erected in 1936. It contains 1,232 cases containing soldiers’ bones which were previously buried in 27 cemeteries in Corfu. Outside under two separate stone plaques are buried the bones of unnamed soldiers.

All the refugees arrived on Italian ships. The French and British provided food, clothes, tents and heating though initially these were inadequate for the numbers. It rained for 8 consecutive days following their arrival.

At first, 300 soldiers died every day in Corfu.

Because there were insufficient burial grounds, the boats from the French hospital ship, “St. Francis of Assisi” carried corpses and dropped them into the Ionian Sea. Serbs described the waters as the “Blue Graveyard.”

The doctors on the Italian transport ships warned: ‘Do not give people anything to eat…they are so weak, they will die from it.’

But when the ships docked, local merchants offered sweets and mandorlato wine. The Serbian soldiers who had been given money in Albania, bought these treats. Their Italian crew and protectors slept after three days and nights without rest, expecting the men to heed their advice. Hundreds of soldiers who had survived the long exodus out of Serbia, now died in agony on the shores of Vido with bread or cake in their mouths. The graves on Corfu and in the mausoleum are largely of these men.

The Serbs were welcomed by the Greeks. One woman wrote to a Serb after the soldiers had moved to Salonica to continue the fight for their country: We have come to know you in the worst misery, in your greatest distress, in rags, exhausted, hungry, without your families, without a country, and still you seem to us so much nicer than our men… Your people always sing, and I had grown accustomed to the songs and the chatter.

The Greek government allowed sessions of the Serbian National Assembly to be held in the National theatre of Corfu from 19th January 1916 to 19th November 1918 when it really became a time for peace. 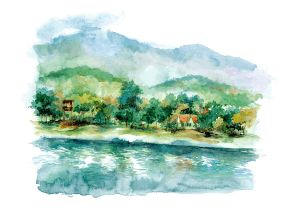