The Cut by Anthony Cartwright

There are some novels that haunt you- in the sense that long after you’ve put them down, you keep discovering something else you’d not thought of. The Cut is one such. 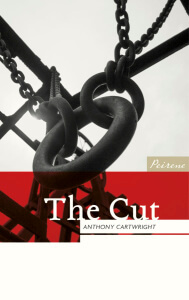 It begins, ‘The young woman runs burning along the side of the marketplace, down the High Street, away from the fountain.’  That woman is Grace, a middle class documentary maker who wants to explore why the people of Dudley voted to leave the EU.

The novel is written by Anthony Cartwright from Dudley whose previous novels have been about the area. Fire is a potent image for him because working class industry- steel, coal – is linked with furnaces and fire, and that industry has gone.

The voice of authority is that of the hero Cairo, a one-time boxer, a proud man who can only find work as a labourer on a zero-hours contract. When Grace- the outsider- arrives to ask questions about Brexit, he is drawn to her, wants her to understand why there is a divide, the cut, not only as it turns out, the West Midlands’ word for canal.Why Dudley is on the wrong side of the industrial rift.  ‘People are tired,’ he tells her and she hears him. 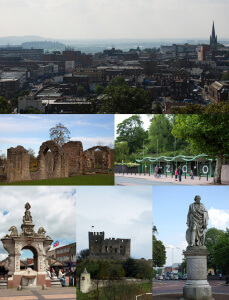 Meeke Ziervogel, Peirene Press commissioned this novel to explore the political and emotional tensions that Brexit highlighted. The late Jo Cox said (in relation to Batley and Spen, the constituency she represented),  ‘… we are far more united than the things that divide us’ and for me that was the story that held and fascinated me. For me, love was/is central. Love within family and the emotional connexions between Cairo and Grace, the yearning to understand ‘the other.’

Small presses publish novels and poetry that otherwise wouldn’t be seen. My own novel and others like it were taken up by Cinnamon Press. The Cut is the second of a series of rapid response novels. The first, breach, is a series of short stories by Olumide Popoola and Annie Holmes,  about The Jungle, the refugee camp at Calais. The stories are not just those who are looking for a new start in the UK but the traffickers, the volunteers and the French who provide accommodation. Breach  put faces to the headlines that sensationalise and cut us off from the truths and complexities of other people’s lives.

I am looking forward to the next Peirene Now! novel. It will be based on the experiences of those who live in the Syrian and Palestinian refugee camp south of Beirut. The publisher has set up a creative writing course for 12 residents of the camp who will contribute to a collection of interlinked stories about their experiences. It will be published in 2018.

Last week I went to the Saatchi gallery in London to see an exhibition, The Lost Men of Syria,  by the photojournalist Edward Jonkler. Like Meeke Ziervogel, he started at the refugee camp in Calais. In order to understand the experience of the refugees and provide the public with a nuanced view of what displaced people experience, he travelled to refugee camps in Syria on the Jordanian border. The exhibition focuses on the men, because they lose their role as head of the family. They were used to working long hours at physical work. 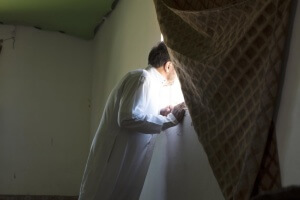 Jonkler says of this man: A very kind, gentle guy. He lives in a house he built on land that could be taken at any time; but he can’t work; so he sits around the house all day. For an hour before his kids come home from school he stands looking out of the window, waiting for their return.

I recommend The Cut as an excellent read and I will look out for the further work of Edward Jonkler.