In December 2018, I began an online course, Tongues in Trees,  provided by Roselle Angwin. I was looking to re-acquaint myself with the names and nature of trees I had thought little about since childhood. The course followed the Celtic moon calendar and 13 specific trees. During the year I kept a diary and this blog provides extracts and photographs.

2nd January 2019
By the Birch in Leamington’s Jephson gardens, I touch its crinkled, wrinkled bark as if greeting a new lover, not sure, knowing that I am drawn. This tree has seen a lot. The Easter floods of 1998, the births of a successions of ducks. Its graceful branches have an overview I cannot share. In the dark months, it slows. The past hangs on it lightly, the future, already a presence, awaits. Deep inside, it reaches out to those that need nurturing.

‘What is the meaning of human life if it comes and goes before a patch of moss has reached the end of infancy?’ Maria Popova 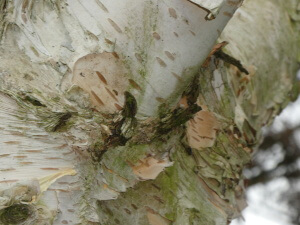 Ryton Pools. Yesterday’s covering of snow has frozen the paths so I walk tentatively on the grass. Unable to be sure that I’ve identified a Rowan, I ask a ranger at the Visitor’s Centre. It is a Hazel – it had catkins. On a bank, part of the Pirate Trail, there are two Rowans, both quite young,  Rowans are mostly small – 10 to 20 metres tall. Leaves are pinnate, fruit a small pome loved by waxwings, thrushes, bullfinches. It is known in Celtic mythology as the Travellers’ Tree because it prevents those on a journey getting lost. On my desk, I keep a small twig that I picked up from the ground under the tree. Is it from the Rowan? 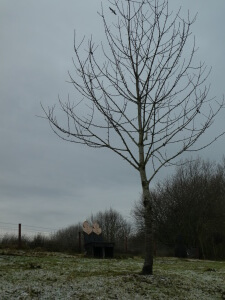 Rowan on the Pirate Trail in Ryton Pools

Its branches won’t easily be broken by snow. Roots will run down the slope, under the path and perhaps extend to Rowans further along the slope. It seems strong, stronger than the other Rowans.

The Ash is part of a group of trees at the far end of Ryton Pools car park. On either side are Elders and Alders. On the main trunk is a nesting box made from Silver Birch. The branches are yellow with lichen. Its branches stretch out and up a little whereas the Elder on one side spills over like an underskirt.

This Ash has the confidence of youth. It invites me to embrace it. Birds sing. Traffic hums. Nettles, leaves and dead branches lie underfoot. It has been planted deliberately. Netting protects its lower trunk. Having survived it thrives. 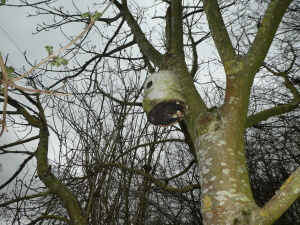 Alders drop bright green leaves during the summer. They tend to grow in swampy, nutrient rich soil and are able to provide new chlorophyll each year. Fungi (Frankia alni) and bacteria at the base of the tree, recycle the discarded leaves for the building up of chlorophyll. Bacterium nodules (as large as a human fist)  on the roots, provide the nitrogen they, and neighbouring alders, need. The exposed roots in the stream provide fish with shelter from predators. The leaves are food to larvae of caddis flies, stone flies and water beetles. The seeds are eaten by siskins, red poll and gold finch.

Alder is a symbol of secrecy and a place for trysting. An old Scottish tradition was to plant Alder stakes round the grave of a childless woman to shield the community from her bad luck. 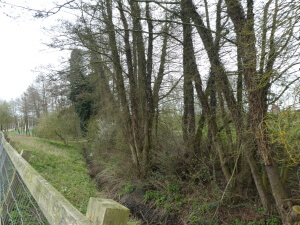 Stand of Alders next to a stream at Ryton Pools

The Willow produce the defensive compound, salicyclic acid,which either kills chewing insects or makes them sick. However, it is the precursor of asprin and a tea made from Willow bark can relieve headaches and reduce fevers. Each tree is either male or female, each secrete an alluring scent to attract bees. Male Willows have bright yellow catkins so bees go there first. They move on to the inconspicuous greenish flowers of the female Willow. Thus the gene pool is constantly refreshed. Willows cope well with floods. 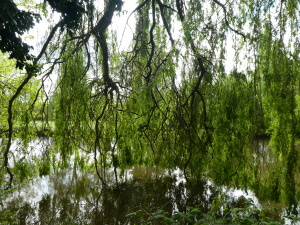 9.00 am Drizzling. Quiet except for ducks. Strong resilient trunk of Willow. Provides shelter. Under the Willow reserved celandines.

‘To create one must be willing to be stone stupid, to sit upon a throne on top of a jackass and spill rubies from one’s mouth. .. Then the river will flow, then we can stand in the stream of it raining down.’ Clarissa Pinkola Estes

Hawthorn mentioned in ancient charters and boundary surveys. It was developed as a defensive barrier. In the eighteenth century Parliamentary enclosure of land, 200,000 miles of ‘quickset’ hedges were planted across Britain.  Hawthorn can flower twice a year. 5 petals, 5 pink-tipped stamens. 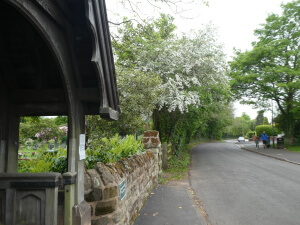 Hawthorn forming part of the boundary along Church Lane, Lillington 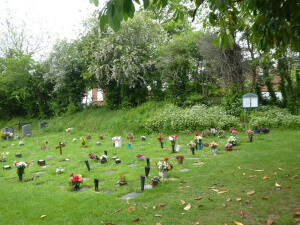 Oak on the other side of our fence. It’s older and taller than the sycamore next to it. Holly grows under it. Leylandii between it and another oak. Row of trees – Firs, Silver Birch – on boundary between Elm Bank Road and Lime Avenue. Stream runs nearby, underground in places.

When I stand under it, I feel it’s strength especially when I’m feeling drained of energy/ability. Sue, on whose land the tree grows, appreciates it. She has it pruned and has put lights on it. Robins, pigeons, rooks, magpies perch/nest in its branches. Though it’s masculine in form and association, from our house, its beauty and grace seem feminine. 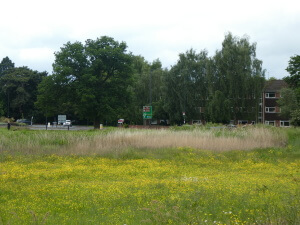 Midland Oak on the boundary between Leamington and Lillington.  The original Oak was cut down as its branches obstructed traffic. Its replacement was grown from one its acorns. 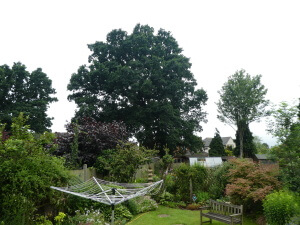 Oak at the bottom of our garden

I love this place between trees and houses. I give air to breathe and take what you don’t need. I feel the wind that removes the dead in autumn, the touch of a robin’s feet, the scurry of squirrels.  I hear the cry of magpies, crows and pigeons. I was planted before the buildings. I am stronger than the elms. I know the secret of long life, of solidity and survival.

Sun shifts through fluttering leaves. I am new to the beauty of the spiky Holly. Straight trunks conceal white wood. Branches like mother’s arms clasping her child. I plod, camera swinging, pannier heavier than I wish. I see Beech, Horse Chestnuts, limes but no Hollies despite this being Holly Walk. The old police station entrance is boarded up. New young offender office, floor to ceiling window. Former Irish club, restaurant 123 boarded up. Victorian and Georgian houses would have seen Hollies, railings and gates at each end, locked from dusk to dawn.Grief in the leaves’ shadows. 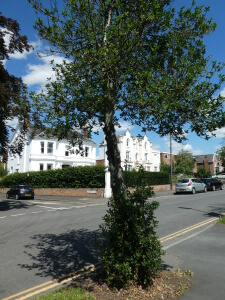 Upper Holly Walk where new Hollies have been planted

Hand-in-hand a family of four: he in shorts and tattoos, she pushing a buggy, boy laughing, girl shouting. 200 years ago, time of optimism for some. Prospect of running water in every house, promenade safe from traffic. Couples in Sunday best stroll hand-in-hand before/after church. Carriages clatter on the other side of railings, of row of Hollies, of gates locked shut at night.

Without the advice of the ranger in Ryton Pools, I wouldn’t have found the Hazel. It is in a coppice surrounded by fences. The branches shoot out of a central bowl. Nuts cluster in twos and threes, some fallen on ground. Some of leaves -serated – have holes in them. Moss, grass, nettles, brambles, thistles. The coppice is on top of a bank, stream flows below it. Nuts are green. Modest unassuming tree. Squirrels, dormice eat nuts. Caterpillars, the leaves. Its twigs are used for diving water. 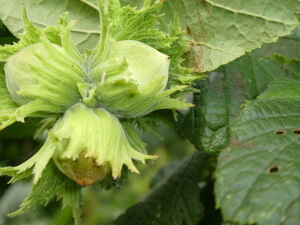 Formation of Hazel nut – my anxiety about finding a Hazel, turned to relief, then peace when I was actually in the coppice.

All over the park a strong breeze batters dry summer leaves. This final day of the school holidays, mothers and children play at make believe. Boys hurtle along paths on bikes and go-carts, girls race to overtake screeching. In Hazel coppice, a dormouse searches for ripened nuts, leaving cracked open, discarded shells among the grasses. Wasps nuzzle under leaves. I feel my fluttering heart steady as autumn turns.

Low point in the year. Snapped the tendon in my little finger. The splint doesn’t straighten it though it’s the best the hospital can do. Take photos at Draycott Water but throughout this moon month little writing about blackberries though I picked enough to freeze for a pie or crumble. Maybe the writing will follow. 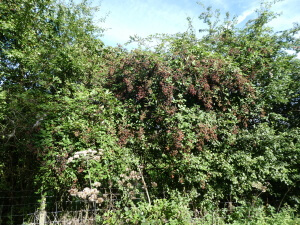 Abundant blackberries in the hedges by Draycott Water

Apples possess 50,000 genes! It’s the most complex plant so far known. I remember Nanna Mac’s apple tree which we climbed, the sour toffee apples at Hull Fair, peeling an apple and throwing the peel over my left shoulder to show the letter of the name of my future husband.

Crab apples grow along a bank of trees which I walked or cycled past almost every day for the past 20 years without my noticing. Most apple trees are grafted on to a hardy root stock like the crab apple. The shiny coating of the pip contains cyanide which keeps the seed dormant until it’s been scarified or stripped away – generally the acid inside the bird which ate it. The bank of trees face bulrushes, reeds and marsh grass. It is a soak away in the event of heavy rain.  There is a beautiful apple tree in the car park opposite M & S. It must have self-seeded. At Ryton Pools I find one across a ditch, not identified by the ranger. It too must have self-seeded. 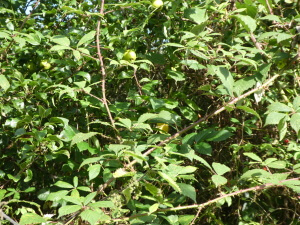 Hidden among brambles and Alders at Ryton Pools 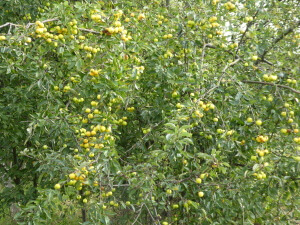 When there were floods in 2008, we remembered a time when our front lawns weren’t block paved, vegetable gardens not re-designed as exterior dining areas. By the Midland Oak, the council built a soak-away in the depression between the children’s play area and the stand of trees that circle the area. Reeds, bulrushes, sedges were planted behind wire fences, a gate and warning notices. 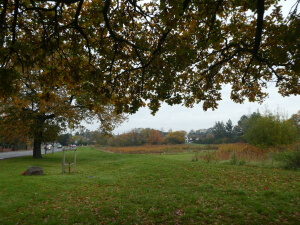 Midland Oak and looking towards the Reeds

This morning the wind is slight. Reeds blow, flicker. All are different though obviously reeds. Tall. some dry, some with remaining green. Flexible and reliable. On my side of the fence, flower head, 3 feet high, browns and fawns of a sparrow. 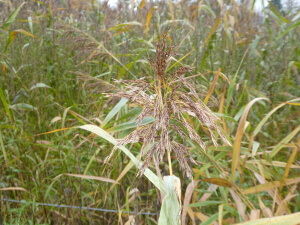 Detail of a Reed head

An oasis of reeds, pause within the traffic, bench on which to contemplate, whispering breeze shaking connections, seeking mysterious depths, silent belonging.

At Ryton Pools, Elders run along the bank of a stream, below the stand of taller Alders. Robin and bullfinches sing. It’s an unassuming tree, has a rough grace,  the roots deeper than they appear. Wood releases noxious fumes due to the presence of cyanogenic glycoside. If it’s in a house with poor ventilation, it could kill. Food cooked over Elder wood tasted bad! The reddish buds are formed, already for spring. 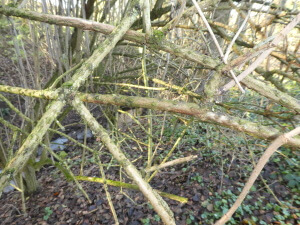 Tangle of Elder branches above the stream

The Celts believed the Elder was a tree of judgement and protection. The Druids passed judgement under a tree. They believed the trees were possessors of infinite wisdom, that they had knowledge of the earth’s cycles. They interpreted signs and omens by listening to the rustling of leaves. With the noise of traffic, this was impossible for me.

Along with the copious material Roselle provided, we were invited to be part of a Facebook group. The members contributed their work as well as references to articles and videos, all of which added to my interest and knowledge. I set myself the task of writing a poem for each lunar month and with the exception of Blackberry was able to do that. My reading and study and writing took place to the backdrop of Brexit much of which upset me. To be focused on trees, their survival and beauty was a balm. I begin the course feeling envious of other students who lived in the countryside, close to woodlands or forests. I ended it, feeling respect for the urban trees which against the odds survive and give me joy.